Crystal Ocean one to beat in red-hot contest

Barsanti A close second in this in 2017 but not so good last year when a comfortably held fourth of five in what was a weak race bar Crystal Ocean. Not disgraced when third of four in a Goodwood Listed race last time but that won’t be good enough for him to hit the places here and needs to up his game. Capri The 2017 St Leger winner endured a lacklustre campaign last term and 2019 hasn’t started any better as he’s been a beaten favourite in two starts. Possibly needed his reappearance but his latest defeat was particularly disappointing and he needs to step up considerably. Coronet Below par when favourite and only fourth in Jockey Club Stakes at Newmarket last time. Possibly needed that reappearance and goes well here having won the 2017 Ribblesdale and also finishing third in last year’s King George. Looks held by Crystal Ocean judged on the latter but holds each-way claims nonetheless. Crystal Ocean Close second to stablemate Poet’s Word in last year’s King George and a comfortable winner of a weak renewal of this last year. Likely he faces a tougher assignment this time but has looked better than ever in two wins this term and undoubtedly the one to beat in the absence of Enable. Defoe Looked in need of the run when fourth in Newbury’s John Porter on his reappearance and stepped up on that next time when second in the Jockey Club Stakes at Newmarket. Career-best when winning Epsom’s Coronation Cup last time so may miss this having now tasted Group 1 success. Ghaiyyath Impressive when making all in a 1m2f Longchamp Group 2 on his reappearance. Not so good when beaten at odds-on over a slightly longer trip at the same track. Remains lightly raced and open to improvement but does step up to 1m4f for the first time. Could prove tough to peg back if he does see it out. Kew Gardens Not at his best on his reappearance when second behind Morando at Chester but far from disgraced on ground plenty soft enough for him and much better when second in the Coronation Cup last time despite not looking suited by the track. Won last year’s Queen’s Vase and respected back at this venue. Lah Ti Dar High-class filly who finished second in last year’s St Leger before her third in Ascot’s Fillies & Mares on Champions Day on ground softer than ideal. Landed York’s Group 2 Middleton over 1m2½f on her reappearance but unsuited by the track in the Coronation Cup last time. Still has claims if none the worse for that experience. Laraaib Lightly raced five-year-old who is gradually getting better with age. Built on his reappearance third in Newbury’s John Porter when chasing home Crystal Ocean in another Group 3 at the track over the same distance next time. Open to further improvement but a fair bit will be needed if he’s to turn the tables on Crystal Ocean. Latrobe Caused a minor surprise when landing last year’s Irish Derby but hasn’t really been able to build on it since. Comfortably beaten in two starts this term, admittedly over trips shorter than he would prefer but still hard to see him suddenly being good enough to win this. Masar Absent through injury since winning last year’s Derby. Progressing nicely until that point and every chance he can resume progress. Has to defy a lengthy layoff, which might be tough but worth checking the market to see what’s expected if lining up – he’s also entered in the Prince of Wales’s Stakes on Wednesday. Mirage Dancer Solid performer at Listed and Group 3 level, as shown when landing a Goodwood Listed contest on his reappearance. Goes well here but the balance of his form means a bit more is required. That’s not impossible, though, given his trainer is a master at improving older horses. Morando Posted a career-best performance when winning Chester’s Ormonde Stakes over 1m5½f on his reappearance but that confirmed his liking for a soft surface and struggled in the Coronation Cup on faster ground last time. Will need plenty of rain to be competitive. Old Persian Didn’t see out the trip in last year’s St Leger but hard to crab his record otherwise. Didn’t get the best of runs in Epsom’s Coronation Cup last time but looked top class when winning two starts in Dubai this year, including the Group 1 Sheema Classic. Won the King Edward VII at last year’s meeting and is respected back at this venue. Salouen Nearly upset Cracksman in last year’s Coronation Cup at Epsom and a fair third this year. Winning looks tough but it would be unwise to afford this front-runner an easy lead, as shown when a comfortable winner of a course-anddistance Listed race on his reappearance. Southern France Connections possibly favouring the staying route – he’s also entered in Gold Cup – after a couple of solid placed efforts over 1m6f this term, notably when a close second to Stradivarius in the Yorkshire Cup last time. Second in last year’s Queen’s Vase, so has course form but might find a few too quick for him if coming here. Verdict With Enable set to miss the meeting, this looks best left to last year’s winner Crystal Ocean, who has looked as good as ever in two wins this term. The biggest dangers are likely to come from Epsom’s Coronation Cup. Kew Gardens and Old Persian were done no favours by the track and how the race panned out, and they rate the biggest threats. 1 Crystal Ocean 2 Old Persian 3 Kew Gardens 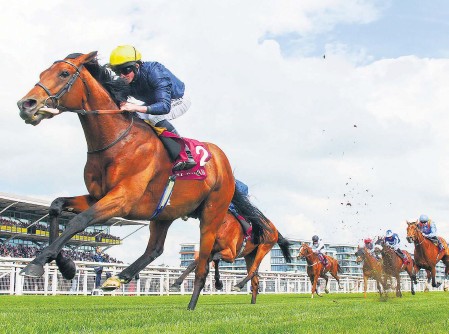