Advertise Rated as high as 112 as a juvenile following victories in the Group 1 Phoenix Stakes and Group 2 July Stakes. Was also second in the Coventry at this meeting 12 months ago and put up a career-best when runner-up to Too Darn Hot in the Dewhurst. Not surprisingly had his supporters for the 2,000 Guineas last month, and his trainer seemed pretty hopeful he would get the mile, but in truth it wasn’t the trip that beat him as he was never going. Questions to answer after that, and Commonwealth Cup perhaps the more likely destination. Decrypt Stable star for Cashel trainer Paddy Twomey and ran a fine race to finish third in the Irish 2,000 Guineas – he could have finished closer on another day. Had barely stepped out of maiden company before that effort, although had looked pretty impressive when winning a conditions race by three lengths at Cork in April. The son of Dark Angel is progressing with every run. He clearly gets the mile well and this race is the next logical step. Fox Champion Gutsy son of Kodiac who has been consistent in winning four of his five career starts for Richard Hannon, including the German 2,000 Guineas at Cologne last month. Made all the running for his last three victories, but unlikely to get his own way here, and while he has improved with every run, this contest is a different ballgame. His success in Germany was not in the strongest of Group 2s. King Of Comedy Exciting son of Kingman who has won three of his four starts, coming to prominence last time when landing the Listed Heron Stakes at Sandown in commanding fashion, smashing a decent field for the grade. The Heron was the race in which stablemate Without Parole was victorious before winning this 12 months ago, and it would be no surprise if John Gosden attempts a repeat. Still has a bit to learn, but he looks the part and is improving at a rate of knots. Magna Grecia Group 1 winner as a juvenile after landed the Futurity at Doncaster, and showed he’d trained on with an emphatic victory in the 2,000 Guineas at Newmarket on his return, although clearly a pace bias accentuated the winning distance. Went off jointfavourite with Too Darn Hot for the Irish 2,000 after that, but was disappointing at the Curragh, finishing fifth behind Phoenix Of Spain, the horse he beat in the Futurity. Now has to bounce back, and that Newmarket form has yet to prove its worth. What is clear is he needs a proper gallop. Phoenix Of Spain Splendid looker who made great strides last term, winning the Group 3 Acomb Stakes at York before finishing second to Too Darn Hot and Magna Grecia on his next two outings. However, he emphatically turned the form around with that pair on his reappearance when running away with the Irish 2,000 Guineas. Went off 16-1 for the Curragh Classic but, following that three-length victory, has now shot to the head of the market for this. Has most definitely improved from two to three on what we saw last month and a repeat performance will make him hard to beat. San Donato Progressive son of Lope De Vega, who won his last three starts at two for Roger Varian, and picked up where he left off on his reappearance in France when third to Persian King in the French Guineas. Not for the first time, he showed he possesses a decent turn of foot at Longchamp, and his preference for a slower surface is clear. Would have each-way claims if there was a bit of rain here, as he’s clearly progressive. Shaman Consistent French raider who was short of Group 1 standard as a juvenile, but gave Persian King most to think about when runner-up to Andre Fabre’s star in the French Guineas. Proved hard to pass on that occasion, and had shown his stamina the time before when bagging a Group 3 over Longchamp’s 1m1f. That success was on good ground, so testing conditions are not a necessity, although rain would help his chances here. Skardu William Haggas-trained colt who stepped up from his sole start at two to remain unbeaten when winning the Craven Stakes in April. Suffered a first defeat in the 2,000 Guineas next time, although won the race on his side of the track in finishing third to Magna Grecia. Turned the form around with his Newmarket conqueror in the Irish 2,000 Guineas, but that effort wasn’t good enough to beat Phoenix Of Spain, finishing fourth. That was his first run away from Newmarket and he’ll have learnt plenty. He remains in the mix for Group 1 honours. Too Darn Hot Different class last term in winning all four starts, and ended 2018 the highest-rated juvenile since Frankel. Excitement bubbled over the winter at what he could do this season, but bubbles have only burst since. Had to miss the 2,000 Guineas due to injury, and then suffered his first defeat on his return when second to Telecaster in the Dante at York. With that, Derby dreams were thwarted, but a quick reappearance saw him take in the Irish 2,000 Guineas, where he again finished second, three lengths behind Phoenix Of Spain. Has questions to answer, but having suffered a turbulent few months, there’s a chance John Gosden can get him back. Verdict Too Darn Hot and Magna Grecia might get closer to Phoenix Of Spain, but the Charlie Hills-trained colt had an unassailable advantage at the Curragh and it’s hard to make a serious case as to why the form will be turned around. There’s no reason why a likely faster pace won’t suit the selection as much as his rivals. 1 Phoenix Of Spain 2 Magna Grecia 3 Too Darn Hot 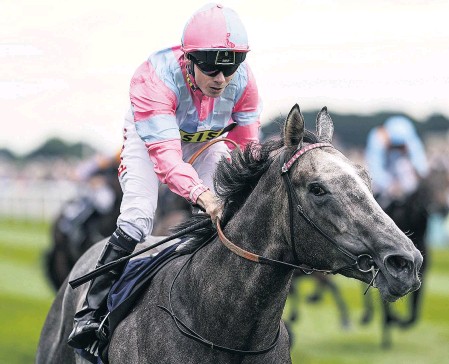