Expect Romanised to bounce back at a massive price

ROMANISED can prove he’s more than just a one-hit wonder in the Queen Anne. What constitutes a one-hit wonder these days? In musical terms, there have been plenty. Think Come On Eileen, Eye Of The Tiger and Mambo No. 5. Three songs that occupied the charts for weeks and weeks all sung by artists who never managed to hit the same dizzy heights with another record. There have been plenty of one-hit wonders in racing, too, and just like Lou Bega, Ken Condon’s 2018 Irish 2,000 Guineas winner could be in danger of drifting off into the sunset of irrelevance if this season doesn’t yield another top-level triumph. That may seem harsh but Romanised has yet to build on that brilliant day at the Curragh last year, but there have been signs that the four-year-old can prove his Classic victory was more than just a flash in the pan. After posting a solid effort on his reappearance in a Group 3 over an inadequate 7f at Naas back in April, Romanised took a big step forward to finish a good fourth in the Group 1 Lockinge at Newbury, where he was denied a clear run. Romanised was quite well backed for the Lockinge and went off just 16-1 yet, after what has to go down as a credible effort in defeat behind the winner Mustashry, he can be backed at odds as big as 40-1 for the Queen Anne. It is worth pointing out Romanised disappointed in two runs at Ascot last season but it’s likely it had nothing to do with the track, more he just didn’t appear to replicate his Guineas-winning form on his subsequent starts as a three-year-old. A fine, big sort, Romanised appears to have done well during the winter and further progression could see him go close in the curtain-raiser, confirming his status as a high-class miler and more than just a one-hit wonder. There were plenty of Royal Ascot clues on offer during Guineas weekend at the Curragh and the biggest was posted by the Aidan O’brien-trained Arizona, who recorded arguably the best performance of any juvenile this season when winning his 6f maiden. In taking a good step forward from his debut second behind another potentially smart sort in Sunday Sovereign, also over 6f at the Curragh, Arizona showed the right attributes needed to win the Coventry Stakes. After breaking well to lead, Arizona was asked to pick up from two out, and the response was impressive, pulling eight lengths clear of his rivals under Ryan Moore. There should be plenty of improvement in this No Nay Never colt, who will take plenty of stopping if allowed to take his chance in the Coventry. Another O’brien-trained runner who caught the eye on Guineas weekend was Constantinople, who was a good winner of the Group 3 Gallinule Stakes. The winning margin may read just half a length, but Constantinople won with plenty to spare, arriving late to lead close to the line. He could easily develop into a St Leger type later in the season and, while he has lots of options at the royal meeting, the Group 2 King Edward VII Stakes over 1m4f looks like his most likely target. Finally, Joseph O’brien is readying a strong team and the pick of them could be King’s Field. Having had his Dubai campaign cut short after picking up a minor setback, King’s Field was an encouraging third on his return in a weak Group 2 at Naas, which should tee him up for the Royal Hunt Cup, for which he can be backed at 25-1. 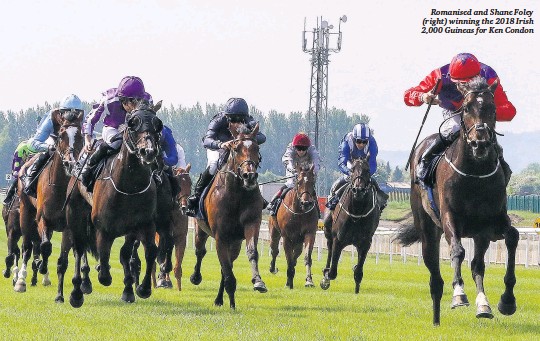