NEWMARKET trainer Richard Spencer has some interesting types to take to Royal Ascot, including Stay Classy, who runs in the Sandringham Handicap over a mile. “She picked up an injury before the Guineas, but she’s back cantering and I’m happy with her,” he said. Spencer could be double-handed as California Love, who won over 7f at Chelmsford in November, could also line up in the same race. “She’ll head straight to Royal Ascot,” he added. Spencer’s classy two-year-old from last season Rumble Inthejungle goes for the Commonwealth Cup. “He’s in good shape and will go for a racecourse gallop before Ascot. I couldn’t be happier with him,” he said. Of his other chances, Spencer said You Never Can Tell will line up in the Britannia, while Sea Of Flames is entered in the Royal Hunt Cup. “Hopefully we’ll have some two-year-olds too, but we’ll see how they progress over the next couple of weeks and take it from there.” The Tom Dascombe-trained Kachy put up a dazzling display to win at Lingfield on All-weather Finals day and has an entry in the Diamond Jubilee. “I was disappointed with the way he ran in the Temple Stakes but all credit to the winner who put up a brilliant performance. We’ll chat with his owners nearer the time but he still holds an entry in the Diamond Jubilee as I don’t think five furlongs is his best trip any more,” he said. Dr Simpson is a two-year-old who finished second at Windsor on her debut. “She’s a really nice filly and is blisteringly fast, so the aim is the Queen Mary, but we’ll see nearer the time,” Dascombe said. “Epaulement is a nice horse who finished second at Chester but ran a bit flat at Redcar. He may line up in the Duke of Edinburgh or he’ll be given a bit of time and go for the Old Newton Cup at Haydock.” Mick Appleby said that Danzeno, who finished fifth in the Wokingham in 2017, will contest that race again this year. “He’s in good form at home and will have a run before. Moonraker may also line up in the race,” he said. The Ian Williams-trained Magic Circle finished third at Chester last time and according to his trainer the aim is the Gold Cup. “We were delighted with his comeback run at Chester last time over a trip that was too short and we’ll be looking forward to seeing him at Ascot,” he said. Time To Study will contest the Ascot Stakes on the Tuesday. “The ground was too soft for him at Chester but he’s in good form and is nicely handicapped,” he said. Of his other chances he said that Aces will run in the Wokingham if he can get in, while Byron Flyer will go for the Duke of Edinburgh. 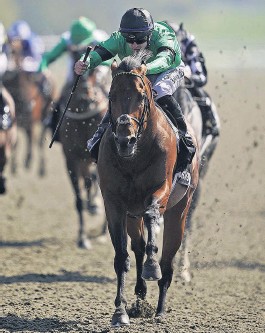