Key pointers to put you on the path to success

INSIDE YOUR ULTIMATE GUIDE

CLASS TO THE FORE Class comes to the fore at Royal Ascot, a meeting which provides the best races for the best horses who have been prepared by the best trainers to peak at this five-day summer showpiece. In a nutshell, assuming the ground is good or faster, it’s a reasonable assumption to make that the best horse will usually win irrespective of any particular perceived draw bias on the straight course or rough races in bigrunner handicaps on the round course. The results from last year’s 30 races add weight as 24 of the winners started at 10-1 or lower. Royal Ascot is perhaps the most fiercely competitive of all Flat fixtures, but it’s a meeting where the form tends to work out well. Richard Birch GO HIGH IN BIG FIELDS Aim high in the big-field handicaps. There isn’t normally much to split the protagonists at the finish of the four competitive handicaps on the straight course – Royal Hunt Cup, Britannia, Sandringham and Wokingham – so it’s always worth trying to find an edge and the most obvious of those is a high draw. Able to race on slightly better ground against the nearside rail, you tend to see the aforementioned contests dominated by those drawn high and that factor can help when narrowing down your shortlist. Tom Collins FOCUS ON IRISH STAYERS It seems blatantly obvious Irish-trained horses have the edge in the staying contests, especially since Gordon Elliott has now put a circle around them in his diary, just like Willie Mullins. Elliott has won the Queen Alexandra Stakes twice in the last three years with Commissioned (2016) and Pallasator (2018), while Mullins was successful in 2012 and 2014. That means either Mullins or Elliott has won four of the last seven runnings. It’s a similar story in the Ascot Stakes. Mullins won the staying handicap in 2012, 2015, 2017 and 2018. Whatever Mullins and Elliott run in those two contests will be of significant interest as you know they will be trained for the race. David Jennings FOLLOW COURSE FORM This is particularly true on the straight track where horses who have run well often come back and do the same again. The combination of strongly run races and big fields on this stiff track tends to suit certain types of horses and a good example came in the opening race of the meeting last year when 33-1 chance Accidental Agent caused an upset in the Queen Anne. Eve Johnson Houghton’s winner had 14lb to find with the best of his rivals but two of his three previous highest RPRS had come on Ascot’s straight track and he was able to bridge the gap in class. Graeme Rodway ENJOY THE FIVE DAYS There is lots of technical help that can be given about draws, pace, trainers and jockeys, but the best advice I can give about Royal Ascot is to enjoy it and not get too carried away. It’s a long week and every race is extremely competitive, so it’s not easy to find winners. Consequently, make sure it’s fun because it can become a chore if things don’t go well on the first couple of days. There are a couple of things that we can do to give ourselves a better chance and the first one is to not limit ourselves to one in a race. These are hard races with big fields, so give yourself the best chance by backing at least a couple. Second, look for sires who have a good record on the straight track. It’s not as pronounced as it once was but American pedigrees generally seem to go well at Ascot and they can provide a good starting point, especially in the sprint races. Tom Segal 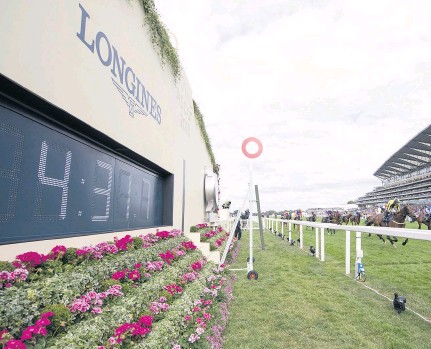