TRYING to identify the source of Scotland’s goals at Euro 2020 isn’t easy but it does offer the real prospect of a big-priced winner copping in their top goalscorer market. Of the 24 sides who contested Euro 2016, ten boasted a leading goalscorer who had just one goal to his name, England were among them. Given the lack of a world-class striker in the Scottish camp and the real belief that they are going to struggle to score goals, have a look at a defender at decent odds, perhaps Grant Hanley at 33-1. The Norwich centre-back has had a superb season leading the Canaries back to the Premier League and is a mainstay of Steve Clarke’s international set-up where he is going to pose a massive threat at set-plays, a key part of Scotland’s artillery. Hanley already has a couple of international goals to his name – the last one in March in a World Cup qualifying draw with Austria – and at a fancy price he appeals far more than his supposedly more potent colleagues who are set to line up in attack. The reality is that Scotland scored just two goals in six games against the four decent teams they encountered in qualifying – Belgium, Russia, Israel and Serbia – and since last September have mustered a mere five goals in six Nations League ties. There is every reason to think they can give England, Croatia and the Czech Republic good work-outs in the next few week, but absolutely no guarantee they will score many goals. 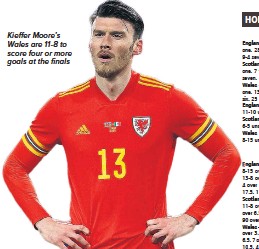