Germans may have to settle for third position

BASED on recent major tournament performances, Group F is the ‘Super League’ of Euro 2020 sections, writes Liam Flin. Portugal are defending European champions, France and Germany have won each of the last two World Cups and Hungary are an improving side who will play two of their matches at a full-capacity Puskas Arena in Budapest. But upon closer inspection it is easy to see which two sides shape up the best going into this summer’s tournament. France are the side to beat, not only in Group F but in the entire European Championship, and world-class youngster Kylian Mbappe has spearheaded their pursuit of the World Cup four years ago. They have the greatest strength in depth in the competition, while manager Didier Deschamps knows his best team and best system and is not afraid to trade style for substance if it means going deep in the tournament. The same can be said of Portugal boss Fernando Santos, who took Portugal all the way against the odds five years ago and now has an even stronger group with Bruno Fernandes, Bernardo Silva, Joao Felix and Ruben Dias in his ranks. As for Germany’s Joachim Low, whether it is switching between a back three and back four or calling up Thomas Muller and Mats Hummels two years after saying they were not needed, the 61-year-old simply looks unsure of how to get the best out of his group. And in a section as tricky as this, he will simply not have the time to tinker. Embarrassing defeats to Spain and North Macedonia since November last year suggest Germany are still in a state of transition and with Hungary’s star player Dominik Szoboszlai out of the squad, the best bet in Group F could be to back France and Portugal to finish in the top two in any order. 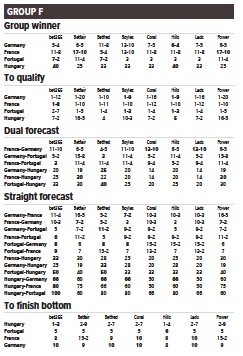