Manager Fernando Santos There is no doubting the credentials of veteran Santos, who led his country to the Euros glory in 2016. His side have been successful thanks to gritty and conservative football but the emergence of more creative talents have seen them adopt a more attacking style recently. Record P 82 W 49 D 21 L 12 All games Strengths • The inimitable Ronaldo • Midfield depth • Ruben Dias is a superb defensive marshal Weaknesses • Focus on Ronaldo can be to the detriment of others • Goalkeeper Rui Patricio may be low on confidence • Pepe and Jose Fonte may struggle to cope with pace Prospects Euro 2016 and Nations League triumphs show Portugal know how to box clever in knockout football and should they get out of a tricky group, they should be well-versed for the latter stages. Inside info Manuvieira Journalist Their is a feeling of confidence in the Portugal camp but being placed in Group F with Germany and France, makes them aware that dream can be cut short. Rui Patricio should start in goal, the defence led by Pepe and Ruben Dias, while the likes of Joao Felix will hope to follow Ronaldo’s lead in attack. 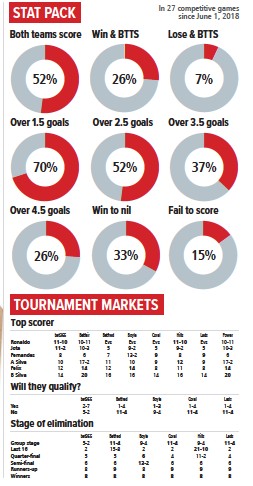