Manager Janne Andersson The 58-year-old has picked up the pieces since replacing Erik Hamren following a below-par Euro 2016 and his defensive-orientated tactics helped guide Sweden to the quarter-final of the 2018 World Cup. Record P 57 W 29 D 11 L 17 All games Strengths • A tight-knit unit • Greater attacking threat than previous years • Share the goals around Weaknesses • Lack a leader • Full-back options limited • Squad depth is an issue Prospects Sweden defied the odds to top their World Cup group in Russia three years ago and they should be confident of sealing a direct place into the knockout stages. They look the second-best team in Group E and finishing in the top-two spots would reward them with a winnable last-16 tie. Inside info Lars Sivertsen Nordic football expert It’s a real shame Ibrahimovic hasn’t made it, not only because he is Ibra but I think he would been the perfect partner for Isak. I am interested to see whether Henrik Larsson’s son, Jordan, gets many minutes. It said a lot for his character that he was able to succeed in Russian football with Spartak Moscow this season. 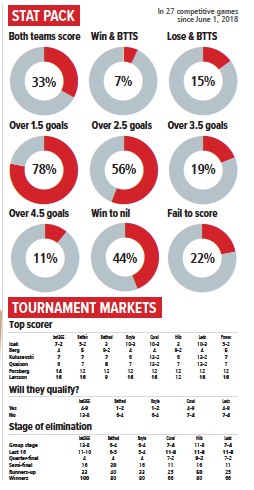