No Zlatan but Swedes can give a good account

TOURNAMENT regulars Sweden are featuring in their sixth successive European Championship and there is plenty of optimism that they can eclipse their efforts of previous years. The Swedes have been eliminated in the group stage in four of their last five tournament appearances and Euro 2016 was deemed a disaster as they crashed out with just a single point. However, Sweden successfully navigated a path to the quarter-finals of the World Cup in Russia three years ago and a fairly convincing qualifying campaign suggests better may be yet to come. Janne Andersson’s men lost only one of their ten qualifiers and while they made little impact in the Nations League the opposition was fierce and they should be judged more on subsequent World Cup qualifying wins over Georgia and Kosovo. Zlatan Ibrahimovic, who had come back out of international retirement, has been starved of a fairytale return to the national squad due to injury. But while the absence of their talismanic figure is a big blow, there is a new generation of Swedish stars bursting onto the scene. Alexander Isak, Juventus ace Dejan Kulusevski and Jordan Larsson, the son of Sweden legend Henrik, lead an exciting younger brigade. With the experienced Emil Forsberg and Robin Quaison both thriving in the Bundesliga and the evergreen Marcus Berg still among the goals at Krasnodar, they have the resources to cause plenty of problems in the final third for the opposition. There are areas lacking in quality, most notably in defence, but this is a tight-knit bunch who are well drilled and in Manchester United man Victor Lindelof they are at least blessed with a first-class centre-back. 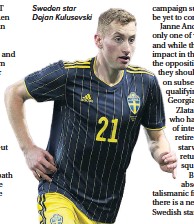