ROBERT LEWANDOWSKI set a new Bundesliga record for the most goals scored in a single campaign as he struck 41 times for Bayern this season, but the prolific Pole has the weight of a football-impassioned nation on his shoulders. At 32, there is a case for suggesting Bayern’s goal getter is better than ever, but the service he acquires in Munich is a class apart from what his Polish teammates can offer. Poland have twice reached the semi-finals of a World Cup – in 1974 and 1982 – but even with the presence of one of the game’s modern greats, they haven’t been able to emulate those heroics. The Poles have limped out at the group stage in five of the six major tournaments they have contested this century – the only exception in France five years ago when Portugal knocked them out in a quarter-final shootout. Defenders give special attention to Lewandowski, who failed to notch at the 2018 World Cup, leaving his tally at just two goals scored from 11 appearances in major competitions. Paulo Sousa’s side eased through qualifying, collecting 25 points from a possible 30, but there is little to suggest they can upstage any of Europe’s heavyweights. Poland have won only one of their last five competitive matches, suffering Nations League defeats to Italy and Netherlands and England in a Wembley World Cup qualifier. Sousa inherits two top goalkeepers in Wojciech Szczesny and Lukasz Fabianski, but the ageing Kamil Glik and Southampton’s Jan Bednarek form the heart of a less-than reliable defence. Napoli playmaker Piotr Zielinski and the talented but often frustrating Arkadiusz Milik will be expected to feed talisman Lewandowski, but whether they can do so remains to be seen. 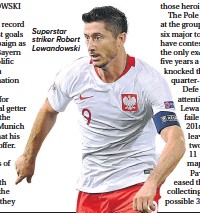