Manager Zlatko Dalic The 54-year-old is assured of a place in history as the man who steered Croatia to their first World Cup final but his relationship with supporters is getting strained after last autumn’s dismal Nations League campaign which featured five defeats in six games. Record P 42 W 20 D 9 L 13 All games Strengths • High-class midfield unit • Iventiveness • Pacy forward unit Weaknesses • Ageing central defence • Lack a clinical goalscorer • Minimal strength in depth Prospects Three years on from going so close to winning the World Cup, Croatia look a team in decline. Their best players are the wrong side of 30 and it will be a surprise if they advance beyond the round of 16. Inside info Ivan Blazicko Head of Croatian Football Television Croatian national players have won more than 20 trophies this season, with many playing very important roles in that line of success. Luka Modric from Real Madrid will again guide the team, with goalkeeper Livakovic from Dinamo Zagreb, Chelsea’s Kovacic, Brozovic from Inter, Vrsaljko from Atletico Madrid and Kramaric, who scored 20 goals for Hoffenheim in the Bundesliga. 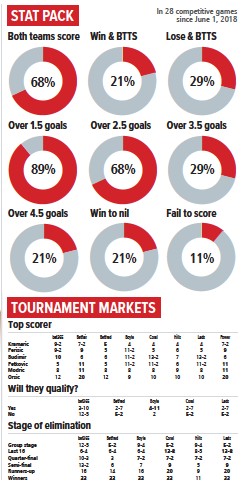