Ukraine can make way through group

AFTER failing to qualify for successive finals, the Netherlands arrive at Euro 2020 eager to return to the big stage with a bang. A kind draw in Group C has given them a good chance of doing so, with their group rivals lacking pedigree in major tournaments, writes Joe Casey. Frank de Boer’s team have been dealt a severe blow with the injury to Virgil van Dijk, but in Stefan de Vrij they have a more than adequate replacement. Goals are a worry though with midfielder Gini Wijnaldum their top scorer in qualifying. However, the likelihood is that those issues won’t be tested until the knockout stages as they should have enough quality to win the group. While the Netherlands should be comfortable winners, the race for second is a close one. There is very little between Austria and Ukraine, as demonstrated by the fact they stand 23rd and 24th respectively in the Fifa rankings. Austria’s recent 4-0 humiliation by Denmark doesn’t inspire confidence and for North Macedonia, simply qualifying for the finals was a huge achievement. Their lack of quality may be exposed against this opposition. Austria and Ukraine will face off in what is likely to be a crucial decider in Bucharest on June 21, and Ukraine are taken to edge a close encounter and finish second behind the Dutch. Andriy Shevchenko’s squad do have match winners in attacking areas and have proved with big results against Spain and France in the last 12 months that they can challenge the top teams. 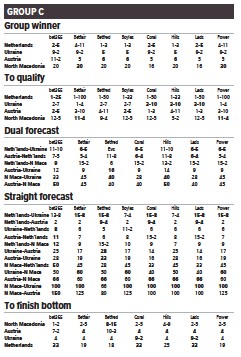