AUSTRIA were well fancied at Euro 2016 after an impressive qualifying campaign, but they struggled from the off and were sent packing with just a point to their name after losing to Hungary and Iceland. Franco Foda’s men will be looking to avenge that disappointment but they made heavy weather of a fairly straightforward qualifying group and have started poorly in their World Cup qualification. In March they drew 2-2 with Scotland and were beaten comfortably 4-0 at home by Denmark. A routine win over the Faroe Islands between those results has not done much to allay fears over their form leading up to the big tournament. This is likely to be a last hurrah for captain Julian Baumgartlinger, plus Stefan Islanker and Andreas Ulmer, and a last chance to improve on their record of no wins at a World Cup or Euros since 1990. Baumgartlinger is also recovering from a torn cruciate ligament. His fitness will be key as he anchors their midfield and allows the more creative Marcel Sabitzer to flourish. David Alaba and Christoph Baumgartner provide quality in the final third and in Sasa Kalajdzic they have a 6ft 7in target man with 16 goals to his name in the Bundesliga this season. He could keep Marco Arnautovic out of the side, with question marks over the fitness of their mercurial talisman who now plies his trade in China. Martin Hinteregger has impressed at the back for Eintracht Frankfurt this year and will probably be partnered by the experienced Aleksandar Dragovic. But Foda has struggled to pin down a number one goalkeeper and all three stoppers in his squad of 26 have fewer than ten caps. Austria give the impression that they are not quite the sum of their parts and they will need to be more attackminded if they are to benefit from their favourable draw. 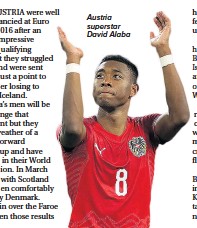