Oranje could flatter to deceive on their return

ASMOOTH run through qualifying and a pair of strong Nations League campaigns had raised expectation levels for the Netherlands ahead of their return to a major tournament after a seven-year absence. A favourable draw has added further fuel to the fire, but the loss of captain Virgil van Dijk to injury and some unconvincing performances under Frank de Boer has tempered their chance of Euro glory. Under the stewardship of former coach Ronald Koeman, the Dutch made light of their previous qualification issues as they finished runners-up to Germany to reach Euro 2020 and an emerging batch of stars had started to rebuild the Oranje’s reputation with victories over the Germans and world champions France. Koeman left his renovation project unfinished though as he was lured to Barcelona and the team initially took a backwards step back under De Boer, who became the first Dutch coach to fail to win any of his first four games in charge. Results have improved since but a 4-2 World Cup qualifying defeat to Turkey in March was a reminder of how much work needs to be done. De Boer’s job has been made significantly harder by Van Dijk’s absence but fortunately he has some high-calibre in Matthijs de Ligt and Stefan de Vrij, who form the base of what is a strong spine to their first-choice 11. Frenkie de Jong is the key piece in the middle of the park, alongside stand-in skipper Georginio Wijnaldum, who has more freedom to get forward than he does as Liverpool. Memphis Depay, fresh from an excellent season at Lyon, leads the attack. Depay and Wijnaldum scored 14 of the Netherlands’ 24 goals in qualifying between them and getting more goals from the rest of the squad is another issue De Boer will need to solve if this Dutch side are to match the class of ‘88. 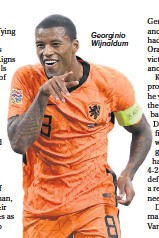