Manager Andriy Shevchenko A national legend and all-time top-scorer now leads his country into a major finals as manager. Plays an attractive style of football, prioritising the counter-attack. Record P 45 W 21 D 13 L 1 All games Strengths • Solid defensively but have talent and flair out wide • They have a number of game winners Weaknesses • Tensions between players of Ukraine’s two main clubs, Dynamo Kiev and Shakhtar Donetsk, can often surface • A terrible record in the Euros, winning just once in six group-stage games. Failed to score at Euro 2016 Prospects With a good draw in Group C, they can cause a few upsets and even run the Netherlands close for top spot. They may come unstuck in the last 16 if they draw an experienced team of quality. Inside info Jonathan Wilson European football expert The political situation in Ukraine is awful in all the real ways but the war could also inspire this team. This is an opportunity to give something back and teams fighting for a greater cause often have the potential to do better than expected in tournaments. 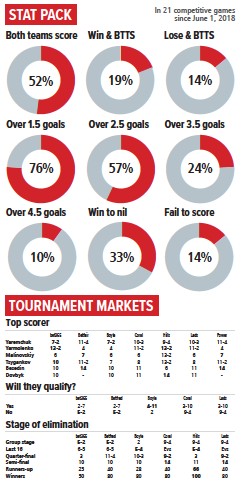