Manager Vladmir Petkovic The meticulous Bosnian-swiss has reached the last 16 of his two major finals at the helm, and is renowned as an astute tactician. Record P 71 W 38 D 15 L 18 All games Strengths • Quality in central defence • Keeper Yann Sommer is underrated • Xherdan Shaqiri comes to life in the red of Switzerland Weaknesses • Main striker Haris Seferovic has scored one goal in 11 matches at major finals • The Baku-rome-baku group schedule does them no favours • Limitations in previous finals are hard to ignore Prospects Four times in major finals since 1994 they’ve got to the last 16 and no further and they will be written off accordingly because of that statistic. The draw’s been kind to them, the schedule less so and the likely lack of goals makes them hard to fancy. Inside info Christian Xander Journalist Led by Arsenal’s Granit Xhaka, much of the Switzerland squad is made up of players based in the German Bundesliga. Goalkeeper Yann Sommer and defender Fabian Schar bring experience, and the Swiss feel they can make it out of their group. 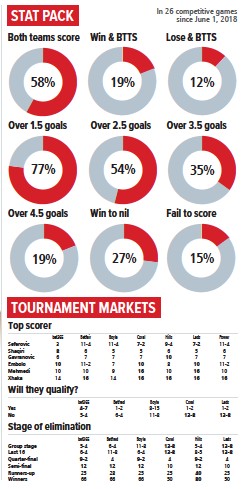