MEMPHIS DEPAY is in demand this summer as his contract with Lyon expires and the Netherlands forward can showcase his quality at Euro 2020. Depay scored 22 goals in 36 Ligue 1 and Coupe de France starts this term and took his international tally to 23 with a brace in March’s World Cup qualifier against Gibraltar. Tougher tests await him at the finals but he should get plenty of chances against Group C rivals Ukraine, Austria and North Macedonia and is likely to be on penalty and free-kick duty for the Dutch. Injury ended Zlatan Ibrahimovic’s hopes of playing for Sweden at the finals but not before he set up Alexander Isak for his sixth international goal in a World Cup qualifying win over Kosovo in March. With Zlatan sidelined, the 21-year-old Isak could steal the show for the Swedes after a stellar season for Real Sociedad in La Liga. Only Lionel Messi, Gerard Moreno, Karim Benzema, Luis Suarez and Sevilla’s Youssef En-Nesyri scored more goals than Isak’s 17 in 34 top-flight appearances and he could make his mark in his first tournament finals. 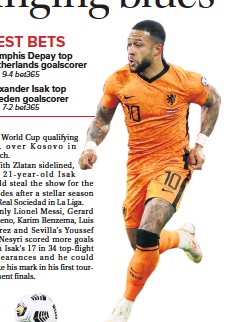