EURO 2020 PLAYER OF THE TOURNAMENT

FRANCE forward Kylian Mbappe is favourite with most bookmakers to follow up his Best Young Player award at the 2018 World Cup with the Player of the Tournament accolade at Euro 2020. The Paris St-germain ace put in some irresistible performances in the Champions League knockout stages, scoring six goals in four games against Barcelona and Bayern Munich, and he was the leading scorer in Ligue 1. However, there are plenty of credible alternatives to Mbappe, not least among his France teammates. Antoine Griezmann won the individual award at Euro 2016, N’Golo Kante was man of the match in the Champions League final and both legs of Chelsea’s semi-final win over Real Madrid, and Manchester United’s Paul Pogba looks a tempting price. Pogba was pilloried for his display in France’s shock 2016 final defeat to Portugal but he was a key part of Les Bleus’ success in Russia three years ago, capping a commanding performance in the final against Croatia with a sweetlystruck goal. Coach Didier Deschamps has stuck by the midfielder during the ups and downs of his career at Old Trafford and Pogba appeared to be back to his best for United before suffering an injury in February. France are expected to go deep into the tournament but Griezmann, Mbappe and the recalled Karim Benzema may end up sharing the goals around for the world champions so the 28-year-old Pogba is worth backing to take centre stage. Kevin de Bruyne’s domestic campaign ended in disappointment as he suffered a facial injury in Manchester City’s Champions League final defeat to Chelsea and his Belgium teammate Romelu Lukaku is preferred. The Uefa panel choosing the 2016 recipient were impressed by Griezmann’s “quality finishing” and there are few more confident forwards at this summer’s tournament than Lukaku. He was outstanding in Inter’s Serie A-winning campaign, contributing 24 goals and 11 assists in 32 starts, and it is hard to see why his odds to win player of the tournament are almost four times as big as his Golden Boot price. 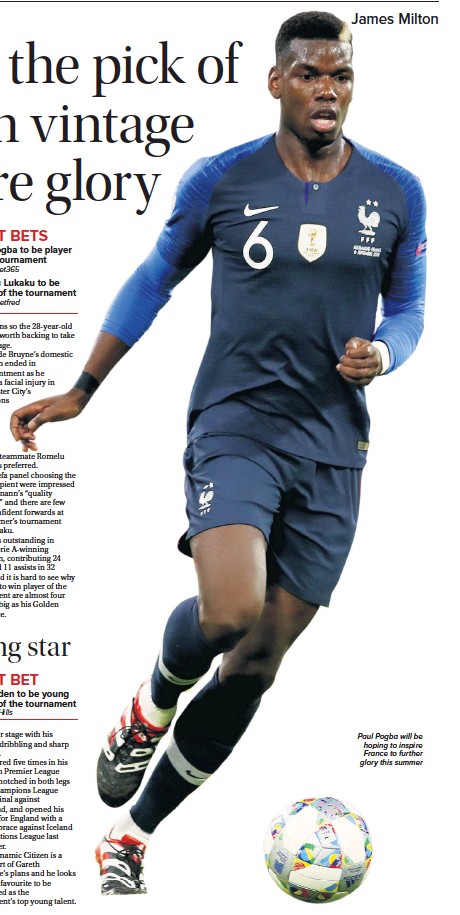