REJUVENATED RED BLAZE A TRAIL FOR DEVIL CAN BELGIUM

ASWITCH to the San Siro has sparked Romelu Lukaku into life and with the Belgium forward operating at the peak of his powers, he looks a leading contender in the race for the Euro 2020 Golden Boot. Recent history suggests it is important to focus on those representing a nation carrying realistic trophy claims, and particularly players boasting previous form in major competition. At Euro 2018, Antoine Griezmann was the Golden Boot hero with six goals from seven starts as France played second fiddle to Portugal. There was a six-player deadheat in 2012 but two of those involved, Fernando Torres of Spain and Italy’s Mario Balotelli, featured in the final, while David Villa topped the scoring charts four years earlier as La Roja reigned supreme. Even when Milan Baros landed a knockout blow in 2004, the Czech Republic had sprung a surprise to reach the semi-finals, and Belgium backers will be hoping the goals of Lukaku can guide them to glory. Things quickly turned sour for Lukaku at Manchester United, but he has been rejuvenated by a move to Serie A and his influence at Inter towers above the impact he had at Old Trafford. In just two campaigns with the Nerazzurri, Lukaku has fired home 64 goals from 87 appearances and his performances this season provided Antonio Conte’s men with the platform to challenge for title supremacy. The 28-year-old didn’t disappoint as he netted 24 times from just 36 league starts, while grabbing 11 assists, to lead home a Milan 1-2 and guide Inter to their first Scudetto in 11 years. Lukaku’s claims are crystal clear, even before considering an equally astonishing goalscoring record for his country. The powerful forward has scored 59 goals from 91 internationals, with 36 of those strikes coming in his last 31 caps to strengthen the case for him being more dominant than ever before. Lukaku scored four times for Belgium in the group stages of the 2018 World Cup, and a Euro 2020 section featuring Denmark, Finland and Russia makes another fast start look likely. With the Inter ace also on penalty duty, he has all bases covered and boasts strong each-way appeal with firms offering four places. The unknown surrounding the well-being of Manchester City magician Kevin De Bruyne is a concern as it could reduce Lukaku’s service, but the Red Devils have a great depth of talent and are no one-man team. HARRY KANE topped the scoring charts at the World Cup three years ago as hit six of England’s 12 tournament goals and the Tottenham talisman is a worthy favourite to emulate those achievements. The Three Lions’ chances depend greatly on the form of Kane, who claimed the Premier League Golden Boot for a third time this season, scoring 23 goals despite leading the line for a Spurs side that could finish only seventh. But transfer speculation linking him with a move away from north London is potentially damaging and there is too much disparity between his price and that of Lukaku’s. There is great firepower in the ranks of France but that means more competition for goals with the surprise return of Real Madrid’s Karim Benzema, who has been out of favour with Didier Deschamps since 2015, denting the prospects of Paris Stgermain prodigy Kylian Mbappe and previous victor Griezmann. The same can be said for France’s Group F rivals Portugal, who have drafted in Manchester United’s Bruno Fernandes, Liverpool’s Diogo Jota and Eintracht Frankfurt’s Andre Silva to challenge Cristiano Ronaldo. Others easy to oppose that figure prominently in the betting are Germany’s Timo Werner, who managed only 12 goals in 52 appearances for Chelsea this season, and Italy’s Ciro Immobile, who despite being prolific for Lazio has struck just 11 times in 44 caps for Azzurri. Poland’s Robert Lewandowski may have his backers after another landmark season with Bayern, but lesser service and just two goals from 11 appearances in major summer competition should temper enthusiasm. Spain have two fascinating contenders in Juventus star Alvaro Morata, 19 goals in 38 caps, and red-hot Villarreal man Gerard Moreno, who scored 23 times in 33 La Liga appearances and was bettered by only Barcelona’s Lionel Messi. But knowing who Luis Enrique will give the nod up front is difficult to predict, so a better alternative could be Netherlands star Memphis Depay. Only Mbappe netted more than Lyon’s Depay – 20 goals in 37 starts – in Ligue 1 this season and the Dutchman also managed nine goals from 13 appearances in their truncated 2019-20 campaign. Depay has a bit to prove for the Netherlands, with his 62 caps yielding just 23 goals, but he is on penalty duty and at 27 he should now be in the pinnacle of his career. A more central role may also be in the offing for Oranje’s chief scoring threat. His claims are also bolstered by the fact that the Dutch have landed in the softest section, with fixtures against Austria, Ukraine and North Macedonia providing him with excellent early opportunities. 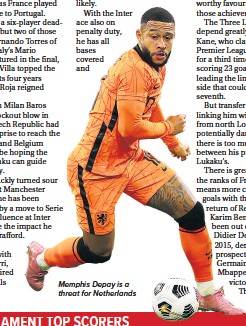 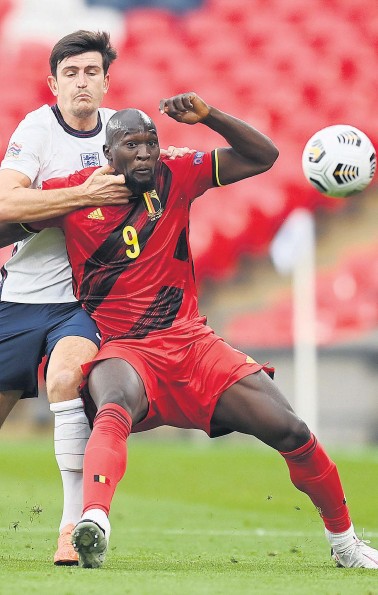