IT pains me to say it but the bottom line is that the German side heading to the Euro 2020 finals quite simply lack class required to win the tournament. They don’t look like a 9-1 chance to lift the trophy and they shouldn’t be favourites to win Group F – a section where they are inferior to two of their opponents, France and Portugal. Portugal and Belgium are the two teams that I fancy this summer and I’m afraid Germany are a long way from that shortlist. The only bet I can think of to consider regarding Joachim Low’s men is to lay them to win their group. I’ve said before that Low has outstayed his welcome – he should have left after the 2018 World Cup debacle but was tied down by a lengthy contract ludicrously handed to him even before those finals. We’ve endure a hammering by Spain, a defeat to North Macedonia and the confusion over recalls for Thomas Muller and Mats Hummels, who should never have been axed in the first place. But I know that some of the senior players in the squad weren’t happy with Muller and Hummels coming back so it will be interesting to see how that plays out. Personally, I think they both help Germany’s cause. The future should be brighter postLow under Hansi Flick – no one else would have pulled off what he did at Bayern Munich – but there is discord in the federation as well so these are troubling times. More immediately, Low has to get the right people in his team, building it around Leon Goretzka, playing Josh Kimmich at right-back and having Kai Havertz up top. This is not a great Germany team and one that doesn’t look like sticking three, four or five goals past teams like before. The aura has long gone. They’ll qualify because victory over Hungary will ensure that but I prefer Portugal in the group and reckon they have an outstanding claim to winning the whole thing at a nice price. The defending champions still look to Cristiano Ronaldo for inspiration but their support cast is probably better than it was five years ago with their supply line of Bernardo Silva, Bruno Fernandes and Diogo Jota as gifted as anything at the finals. And at the back the exceptional Ruben Dias and Joao Cancelo are coming off fantastic seasons with Manchester City. They could be better than they were five years ago. Belgium have to be massive runners with Kevin De Bruyne playing the best football of his career. I love Youri Tielemans in a role I know well and if Eden Hazard is fit to support a frontline full of goals, Belgium are also going to be a danger. 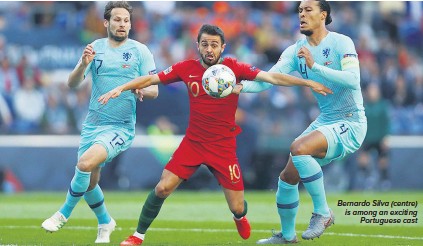