MAKE them laugh, make them cry, make them wait. It was a classic style of writing in the Victorian times when novels were expensive and many authors would instead produce work for publications in the style of a serial, spreading the cost over a more palatable spending plan for readers. Swap books for television and that process of the cliffhanger remains as strong now as it did when Charles Dickens wrote Great Expectations under much strain at the end of 1860 and into the middle of the following year. Dickens was forced into the role of almost player-manager when his own publication, All the Year Round, was hosting a story from a guest writer which flunked. He grabbed his pen, knocked out Great Expectations on the fly, and often complained of the unabating work schedule as he struggled to keep pace with the urgent demand for each new chapter to be written. It was obviously worth the graft – after all here it is being referenced in a betting guide to a football competition in 2021 – even if the star of the show was possibly overwhelmed by the continued thirst for more from adoring fans of a shared passion. And so to Euro 2020, 12 months later than planned, following, quite frankly, a ridiculous club calendar which must have left the headline acts fatigued from a schedule like no other. For goodness sake, it was exhausting just watching the relentless wall-to-wall football played out in front of often soul-destroying empty bowls and supporters could be forgiven for needing their summer break almost as much as the players themselves. Until recently, it was a view shared by yours truly, but then something changed. Fans returned to stadiums and reality hit. What we had greedily consumed this season and during the restart of last term was not proper football, just something which broadly resembled the sport until the near 15-month hiatus was safe enough to return to its lofty position as the greatest game of them all. There's a new energy around Euro 2020, great expectations if you will, and rightly so because an international tournament has the ability to transcend and leave a lifetime of collective memories with friends and family as club rivalry is put to one side... until mid-july. We can all make predictions before a World Cup or Euros starts and this guide has 72 pages of them, but history tells us the true beauty of a tournament is you just don't know when the next twist will come. Some will make you smile and others despair. It's normal tournament life. Not a new normal, the old normal. All you can be confident of is a fresh story will be made when Italy host Turkey on June 11 and another the next day and the day after that and so on until the white-knuckle ride comes to a stop with the Wembley final on July 11, a culmination of 51 matches played over a month will make it a tale of 11 European cities, most of which have previously been shutdown by a devastating global pandemic. We've been made to wait. Now it's time to laugh and maybe even cry too. 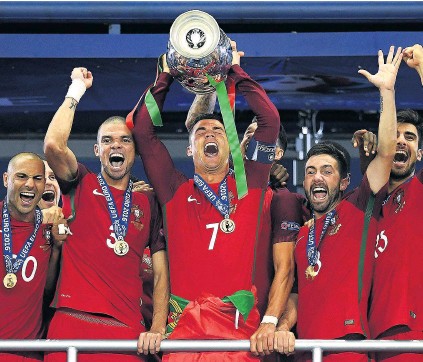