All of the last ten winners had previously recorded a Racing Post Rating of 142+ over hurdles In the 1990s it was common for former Flat horses to win this off the back of a single run over hurdles. Now the race is different as it tends to be dominated by jumps types who have gained the necessary experience over the smaller obstacles. That means they tend to reach a certain standard, and given this current stat I think we’re safe to scratch anything yet to peak above the 140 mark. If there is any Willie Mullins French-bred in the field, pay attention. Since 2014 Mullins has had eight runners who were bred in France with three wins and a second. But despite his success, what has not changed is the poor record of short-priced favourites. In the last 31 years there have been as many as 14 market leaders starting at under 3-1 with just two (Douvan and Like-a-butterfly) going in. That’s a pretty average strike-rate of 15 per cent. Verdict Mullins’ Appreciate It has the curse of being a short-priced favourite this year, and because of the jolly’s poor record in this he’s passed over in favour of Soaring Glory. The Betfair Hurdle winner is one of the few who meet the required standard on RPRS, and winners of the Newbury handicap have run well in this before. 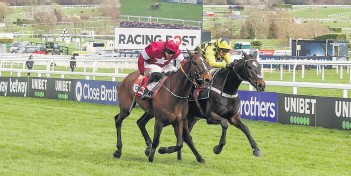