Expect strong Irish raiding party to rack up the numbers

IT SEEMS inevitable that the Irish will dominate this year’s festival and odds of 1-6 suggest only a travel ban can stop the Prestbury Cup heading across the Irish Sea. Twenty-three of the 28 favourites are trained in Ireland and it seems almost certain that the bookies have got the betting right. At the prices, betting on the number of winners from Ireland looks a much more interesting market and it could be a complete domination, so the 5-2 available for 18 or more Irish-trained winners, with Sky Bet, looks a great bet. While the Irish have 23 favourites, they also have a number of strong market leaders to the extent where they have serious chances in every race at the meeting. It could be a procession and 19 winners is certainly plausible. It could be worth chancing Willie Mullins to train a 1-2-3 in any race at the Cheltenham Festival (4-1, Sky Bet). The master of Closutton typically dominates the placings in races such as the Mares’ Novices’ Hurdle, County Hurdle and Champion Bumper, and considering how impressive all of his runners performed at the Dublin Racing Festival, he certainly has a great chance of filling the first three places in a number of races at the festival. It is difficult to look past JP Mcmanus to be leading owner considering the number of chances he has across the meeting, and he is not short on quality too. Epatante, Easysland, Sire Du Berlais, Champ and Elimay are among his most high-profile chances across the four days, while the Mcmanus runners are always feared in festival handicaps. Last season Mcmanus-owned runners landed four of the five handicap hurdles at the meeting. Gigginstown House Stud lack the same sort of quality while Cheveley Park and Joe Donnelly boast an enviable string but they have little strength in the big handicaps, which makes Mcmanus a great bet for the leading owner prize at 11-10. The race which produces the biggest winning distance is an interesting betting prospect and the National Hunt Chase is good value at 7-1. It does not look a particularly strong affair this season, which offers the chance of a horse streaking clear. Also the 3m6f trip allows distances between horses to be exaggerated, while being a novice chase a few runners may fail to finish, which increases the chance of a wide-margin win. At a bigger price, the Mares’ Novices’ Hurdle could be another race to look at given the pool of horses who could run are significantly smaller. The likes of Laurina and Concertista have stormed home in previous years and it would be no surprise if a genuine Grade 1-class mare takes that step forward and demolishes her rivals in the process. Sky Bet are offering odds on the shortest SP between Envoi Allen, Monkfish, Concertista, Chacun Pour Soi and Easysland, and the first-named appeals at odds of 6-4. Envoi Allen is one of the most popular horses in training and rates as banker material in the Marsh Novices’ Chase. His two biggest market rivals – Energumene and Monkfish – have other targets and festival form is always popular with punters. With so many strong favourites on the first two days, perhaps they will have profit to invest in last year’s Ballymore Novices’ Hurdle hero. 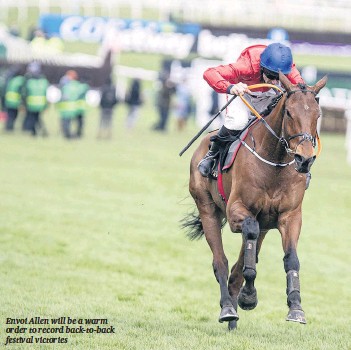 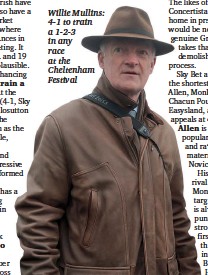