Ben Harris seeks out the value over the four days

TUESDAY Sky Bet Supreme Novices’ Hurdle (1.20) It looks far from a vintage running of the Supreme and while the Willie Mullins-trained Appreciate It is the correct favourite, it’s his stablemate Ganapathi who catches my eye as a potential spoiler. He won on his hurdling debut at Cork in a very good time before being run down by a much more experienced rival in Dreal Deal on his next start. His latest outing was over 2m6f where he travelled into the race takingly before patently not staying the trip. The test of the Supreme will suit and with a bit more experience under his belt, I can see him taking a big step forward. Boodles Juvenile Handicap Hurdle (4.15) Glorious Zoff impressed on his hurdling debut back in October when scoring by 12 lengths, but he must overcome a couple of disappointing runs since to figure here. He was nabbed close home after trading at 1.01 in running on his second start, but he raced freely and jumped poorly as a result of a slow pace. He was subsequently well beaten by Monmiral, but the yard’s runners were not firing over Christmas and he’s since shown he’s back in good order on the Flat. His hurdles mark of 131 looks more than fair. National Hunt Chase (4.50) Nestor Park strung together some decent form in bumpers and throughout his novice hurdling season but seemed to lose his way towards the end of 2019, pulling up on three consecutive starts. He has been a different proposition this season, however, posting four solid efforts, including last time when chasing home Lieutenant Rocco, who looks a lovely horse. His jumping was far from polished on that occasion, making a shuddering error at the third-last, but this marathon trip will suit and he could be a player at a lively price with a better round of jumping. WEDNESDAY Coral Cup (2.30) Nicky Henderson knows what it takes to win the Coral Cup and the unexposed Craigneiche looks to have a real chance of making it three in a row for the yard. He stayed on into third behind The Big Breakaway on his hurdling debut before shedding his maiden tag next time, despite bleeding. He couldn’t have been more impressive on his return from more than a year off when winning what is typically a competitive Grade 3 handicap at Ascot. He’s up 12lb for that win, which should see him squeeze into this, and he could have the talent to overcome his inexperience. Johnny Henderson Grand Annual Handicap Chase (4.15) People may indeed ask Whats wrong with you for liking a horse who unseated at the first fence on his only start this season, but I had him in mind for this last year following his 2019 run in the race. He was sent off a well-supported 8-1 but he was given a mountain to climb turning in and came home by far the best of those held up, with the first five turning in filling those spots at the finish. He has run only a few times since, over further and on bad ground, and the return to this trip, track and better ground will suit. He has certainly not had the ideal prep, but has won off a lengthy break before and can go well from an 8lb lower mark than in 2019. THURSDAY Paddy Power Plate (3.40) Conf lated was my fancy for the Martin Pipe last year having chased home Latest Exhibition, Envoi Allen and Asterion Forlonge in Graded novice hurdles, but he never made it to the festival. He wasn’t beaten all that far on each of his first two chase starts by nice horses in Darver Star and Asterion Forlonge, despite jumping out to his left. He put that right once sent left-handed, bolting up by 17 lengths at Navan. He disappointed over three miles behind Monkfish at Christmas, but the yard’s runners weren’t firing, and I remain confident he has a big handicap pot in him at these weights. Parnell Properties Mares’ Novices’ Hurdle (4.15) Willie Mullins has won all five runnings of this race since its inception in 2016 and while he has more fancied runners, I am really keen on Glens Of Antrim, a sister to the talented mare Minella Melody – who was a disappointing favourite in this last year. Glens Of Antrim has shown plenty of speed in two runs over further, when she looked to be outstayed by nice types in Mr Incredible and Stattler. The drop in trip looks perfect here and it would be no surprise to see her serve it up to her stablemates at the top of the betting. FRIDAY Mccoy Contractors County Hurdle (1.55) Fire Attack was a smart bumper horse last season and seemingly built on that promise on his hurdling debut when second in a Grade 3 novice at Navan. He pulled his way to the front and did well to finish as close to Fakiera as he did, but that keenness has plagued him since. He has yet to build on that run, but looks to be well handicapped as a result. He’s entered in the County, Martin Pipe and Coral Cup, but has the speed for this test, and if a big-field, strongly run handicap can see him settle, he has a great chance of going close from off the pace. Albert Bartlett Novices’ Hurdle (2.30) Streets Of Doyen looks overpriced in what appears to be an ordinary enough Albert Bartlett. He should get his preferred quick ground and the pick of his form looks good enough to see him involved. He was put away during the winter following a victory over course and distance. Earlier in the season he beat Flooring Porter by five lengths, albeit in receipt of a stone, and that horse has subequently gone up 29lb in the handicap to a mark of 160. He’s a tough, relentless galloper and providing he gets his ground, looks ideal for this test. Coral Cup winner Dame De Compagnie (SP 5-1f) was advised in this column at 14-1 last year 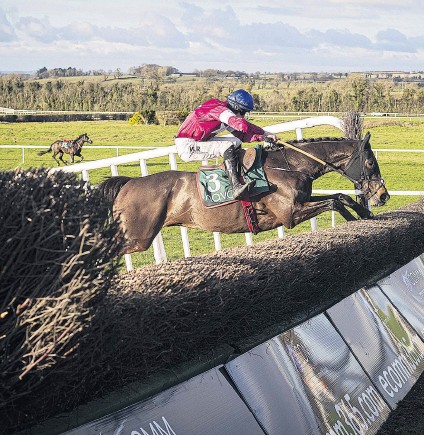