ANOTHER busy year of stallion acquisitions and movements in France is headed by Haras d’etreham’s purchase of unbeaten juvenile and Prix Jean-luc Lagardere winner Wootton Bassett to begin his stallion career at the Normandy stud, writes Martin Stevens. Wootton Bassett should attract plenty of interest. He is by Iffraaj, who broke the record for number of individual juvenile winners in his first crop, and is from a tough and fast family: he is a half-brother to Brocklesby Stakes winner and smart handicapper Mister Hardy and to the dam of dual Listed-winning sprinter Katla, out of the Listed-placed Primo Dominie mare Balladonia. Shakespearean becomes the first son of Shamardal to join the French stallion ranks with his retirement to the Haras de la Hetraie. Winner of the Solario Stakes and Goffs Million Mile at two and the Hungerford Stakes at three, he hails from a family French breeders will know well: his dam is a half-sister to Poule d’essai des Pouliches runner-up Pont-aven, who produced Deauville Listed winner Cap Coz, who in turn produced the most expensive yearling sold in the ring at 2010’s Arqana August yearling sale, subsequent Middle Park Stakes third Reply. Two budding operations each have a pair of new acquisitions. A leader in the field of standing trotting stallions, Manuel Ahres’s Genes Diffusion is branching out into thoroughbreds for the first time with Cat Junior and Magadan. Cat Junior must qualify as one of the best-bred horses to retire to stud this year; he is by Storm Cat and out of Sadler’s Wells’s Prix Saint-alary-winning daughter Luna Wells, a half-sister to high-achieving French stallion Linamix. He converted his quality pedigree into racecourse performance by winning a Meydan Group 3 and top-four finishes in the St James’s Palace Stakes, Prix Jean Prat and Prix de la Foret. Magadan becomes the first son of So You Think’s sire High Chaparral to enter stud in Europe. He is out of a half-sister to Light Shift and Shiva and won a Group 3 and was third to Montmartre in the Grand Prix de Paris. The Haras de Saint Arnoult, owned by former BBC producer Larissa Kneip, stands another nominee for best-bred retiree this year in Dalghar, an Anabaa half-brother to Dalakhani and Daylami who won a Longchamp Group 3 and finished placed in the Lennox and Diadem Stakes. He will cover alongside fellow newcomer Yellowstone, a Gordon Stakes-winning son of Rock Of Gibraltar. The best French horse to retire to stud in his homeland is Never On Sunday, a son of the Forty Niner stallion Sunday Break who beat Gris De Gris in the 2009 Prix d’ispahan and finished second in the Gulfstream Park Turf Handicap after being transferred to America. He will stand at the Haras de Grandcamp. France’s stallion ranks will also be swollen by a number of high-profile transfers from Britain and Ireland. Darley sire Refuse To Bend moves to the country where his progeny, including successive Prix Saint-alary winners Sarafina and Wavering, have made the biggest impact. He joins the Haras du Logis. Myboycharlie, whose first foals are yearlings this year, goes to the Haras du Mezeray after spending his first two years at the National Stud. He was the first of consecutive winners of the Prix Morny for his sire Danetime, with Bushranger following up the year after. Heliostatic, whose first small crop of juveniles made a big impact last year, featuring a high winners-to-runners ratio and the Group 3 winner Crius, moves from Oak Lodge Stud to the Haras des Brousses. The son of Galileo’s Irish Derby-winning brother Soldier Of Fortune was retired to stud in France two years ago. Captain Marvelous, whose first crop are two-year-olds, moves from Ballyhane Stud to the Haras des Fontaines for this year. It is a quiet year for German stallion movements with only the one major new retirement: 2009 Deutsches Derby hero Wiener Walzer to Gestüt Erftmuhle. He is by Dynaformer, whose habit of getting hard-knocking middle-distance Classic winners such as Blue Bunting and Lucarno is sure to go down well with German breeders. Lucarno joins the Haras de Saint-voir from Britain this year. Kamsin, whose name features on the German Derby roll of honour in the year before Wiener Walzer, moves from his breeders’ Gestut Karlshof to Gestüt Röttgen. He is by Monsun’s best German stallion son Samum, sire of last year’s Group 1 winners Be Fabulous and Durban Thunder. Buzzword, the 2010 Deutsches Derby winner, retires to stud at the Allevamento di Besnate in Italy. The son of Pivotal was also a high-class performer at two, winning the Prix la Rochette and finishing second in the Solario and Richmond Stakes, and he is from the high-achieving family of Lush Lashes and Saumarez. Italy’s other high-profile new stallion is National Stakes hero Kingsfort, a War Chant half-brother to US Grade 1 winner Prince Arch (who, incidentally, moves from Britain to the Haras du Broussard in France this year). Due to the closure of prestigious German stud Gestüt Isarland, Italy gains a Classic winner and proven sire in Desert Prince. The son of Green Desert’s best performers are Kalaman, Mourilyan and Mail The Desert. 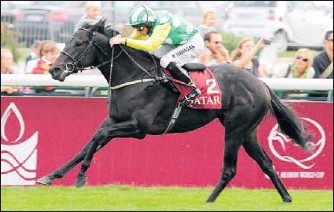