Canford Cliffs Tagula-mrs Marsh (Marju) Standing at Coolmore Stud for € 17,500 Racing Post Rating high: 130 Performance Rated by trainer Richard Hannon as the best he has trained in his 42-year career, Canford Cliffs retires with a stellar record of five Group 1 victories. His ability was no secret when he stepped on to a racecourse for the first time in May 2009. Sent off the 11-8 favourite for a traditionally informative 6f maiden at Newbury, Canford Cliffs made short work of his rivals to score by seven lengths before turning in an equally dominant display to win the Coventry Stakes at Royal Ascot by six lengths. That performance, in which he quickened off his own ferocious gallop, marked Canford Cliffs as a colt of exceptional ability. Although he was defeated on his first tries at Group 1 level, when third in the Prix Morny and 2,000 Guineas, he confirmed his position near the head of the miling division at three with clear-cut successes in the Irish 2,000 Guineas, St James’s Palace Stakes and over older colt Rip Van Winkle in the Sussex Stakes. Victory in the Lockinge and a defeat of the mighty Goldikova in the Queen Anne Stakes followed as a four-year-old. He bowed out last July with a runner-up effort to Frankel in the Sussex Stakes. Pedigree A £50,000 yearling purchase by Peter Doyle, Canford Cliffs is the only Group 1 winner by Tagula, a son of Taufan who made his name as a decent source of two-year-old winners and sprinters. As a descendant of Hail To Reason, a sire line that has enjoyed success recently in Europe through Intikhab and Big Bad Bob, Canford Cliffs is an important acquisition for Coolmore at a time when its roster is saturated with Danehill and Sadler’s Wells blood. He is a half-brother to minor winner Zeeran out of an unraced half-sister to Grade 2 winner Pina Colada and daughter of the Grade 1-placed Triple Tipple. Dabbers Ridge Indian Ridge-much Commended (Most Welcome) Norton Grove Stud £750 RPR 109 Performance Few stallions retiring this year can claim to have won as many races as Dabbers Ridge. And although six of his 12 victories came in plating company, in 2006 and 2007 he was one of the classiest handicappers on the circuit. At four he won a Chester Class 2 handicap by five lengths before coming third in the Listed Hambleton Handicap, finishing midfield in the Royal Hunt Cup and then gaining his career-high RPR of 109 with a neck victory in the valuable International Handicap over 7f at Ascot. The following season he won another valuable handicap, this time over 6f at Haydock, and at five he showed his class with a clear-cut victory over the high-class Welsh Emperor in a 7f conditions race. Pedigree Dabbers Ridge is likely to be one of the last sons of Indian Ridge, who died in 2006, to be retired to stud. Indian Ridge produced top-class horses such as Cassandra Go, Domedriver and Namid, and his sire sons Compton Place and Sleeping Indian were represented by Group winners last year. Dabbers Ridge is out of the Most Welcome mare Much Commended, a 6f winner on her juvenile debut who finished third in the German 1,000 Guineas at three. The dam’s other progeny include Magic Eye (Nayef), a four-time Listed winner over 7f-1m, and multiple winners Few Are Chosen and Much Acclaimed, both by Sulamani. She is a sister to 1m2f Grade 2 scorer Prize Giving and a half-sister to top hurdler Pridwell, as well as the dams of Hardwicke Stakes winner Bronze Cannon and dual Grade 1 winner Alpride. 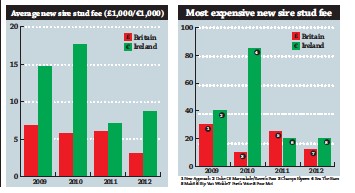 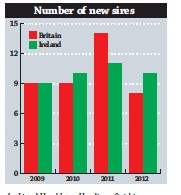