DERBY winner Pour Moi heads the 2012 intake of 19 new stallions in Britain and Ireland, which represents a drop of almost a third from the number who retired to stud in 2011. Only four of those stallions – the Coolmore duo Canford Cliffs and Pour Moi, Ballylinch Stud’s Dream Ahead and Darley’s Poet’s Voice – stand for five figures, while only eight stand for £5,000/€5,000 or more. Compare that to a year ago when Makfi, at £25,000, headed a group of 15 stallions available at £5,000/€5,000 or above. In terms of racecourse performance, the 11 Irish retirees are an undoubtedly stronger group than those in Britain; between them, Canford Cliffs, Dream Ahead, Frozen Fire, Pour Moi, Roderic O’connor and Zoffany won 15 Group 1 races. Their strength as a group is borne out by the fact that the average fee of new Irish stallions this year is € 8,850, up from € 7,035 a year ago. The British stallion ranks have welcomed three Group 1 winners in Dick Turpin, Poet’s Voice and Eastern Anthem. Yet the list represents a distinct bias towards dual-purpose horses, which has resulted in the average British stud fee more than halving from £6,045 in 2011 to £3,325. 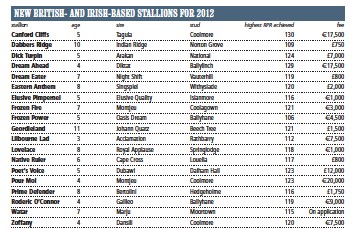